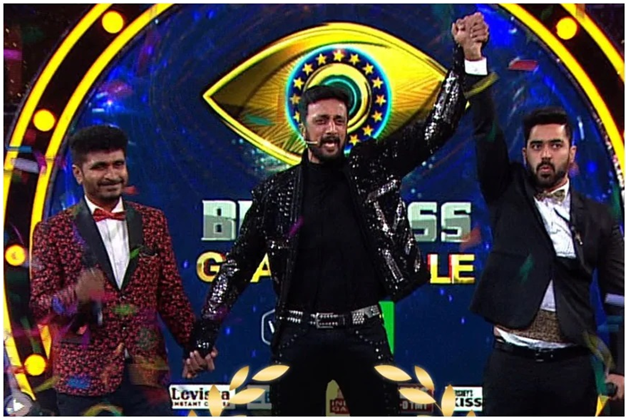 “It’s Official! Bigg Boss Kannada Is All Set To Return For An Eighth Season, Will Be Hosted By Sudeep”

Bigg Boss Kannada is all set is return with an eighth season later this year and will continue to be hosted by superstar Sudeep. The news was confirmed by Colors Kannada’s business head Parameshwar Gundkal who also addressed the issue of commencing the show this year amid the ongoing COVID-19 crisis.

The Times of India quoted him as saying, “The show will go on. There is no doubt about that. However, there is still a certain amount of uncertainty over when the show will begin as a lot depend on how the economy and market picks up. Bigg Boss demands a huge budget, so we are keeping an eye on the market. Our main priority is also the safety of the contestants who enter the house, especially as Coronavirus cases are witnessing a surge. For us, the financial year will be the end of March, we are hopeful of having the show by then. As of now, we are looking to begin finalizing contestants for the show by November this year.”

A close source to the development added, “An internal communication addressing the new process to prepare for this show has already been sent out. This season, contestants will have to undergo medical check-ups on a consistent basis when they are inside the house as it is important to monitor their health. Social distancing will be maintained as well, and we are also ensuring an age limit for contestants.”

For the unversed, the previous season of Kannada Bigg Boss saw a return to its original format with just celebrities entering the glasshouse as contestants. This year too, the makers will stick with celebrities and have already started approaching many big names from different walks of life. The on-ground preparation has also commenced and just like last year, the Bigg Boss house will be situated in the Innovative film city in Bidadi.

Bigg Boss Kannada has become the number one show in south India. Check out the list of BB Kannada winners of all seasons.

Similar to Bigg Bosss Hindi, Tamil or Telugu, Bigg Boss Kannada has also become one of the most popular TV reality show in South India. The Kannada version of the Bigg Boss broadcasts on Colors Kannada

Produced by Endemol, the first two seasons of Bigg Boss Kannada was shot in Lonavala, Pune, where the sets of Bigg Boss Hindi usually takes place. Later, a house was built exclusively for the Kannada version of the show at Innovative Film City in Bengaluru, Karnataka.

The first show premiered in 2013 and was hosted by the South Indian actor, Kiccha Sudeep and he has been the host for all the seasons. The seventh season of Bigg Boss Kannada will soon go on air on Colors Kannada.

The host Kiccha Sudeep has already shot the first promo of the Bigg Boss Kannada 7 in the Innovative film city, Bidadi on September 11. The new season, unlike the previous seasons, will only consist of celebrities. After having the celebrities and commoners under the same roof in the previous season, the makers are set to make some major changes in the format.

Vijay is the son of producer S. A. Chinne Gowda. Vijay started to act in films featuring his uncle Rajkumar in the lead. Later, he underwent formal training in acting at Chennai after working in eight films as a child artist. Vijay Raghavendra won the “Karnataka State Film Award for Best Actor.”

Akul Balaji is an Indian film actor, television host, and dancer who has worked in both Kannada and Telugu languages. He won “The most popular anchor award” by Big FM Big TV in 2010.

Girija who is known by her screen name Shruti, is an Indian actress, television personality and politician. Currently, she is a chief secretary of the Bharatiya Janata Party’s women’s wing in its Karnataka cadre.

Pratham, known popularly as Olle Huduga Pratham, is a director and is known for his work in the Kannada cinema.

Chandan is a singer and is known for singing in the Kannada language. He entered the music industry in 2012 as lyricist and assistant music director for the movie Alemar

Shashi is a farmer by occupation and entered the show as a common man.  He is also interested in folk dance and theatre.

According to polls, Shine Shetty will emerge as the winner of Bigg Boss Kannada season 7.

Bigg Boss Kannada is a Kannada version of the popular television reality shows Bigg Boss. The TV show has successfully completed its seven seasons. And now makers of the show will be coming up with the 8th season of the show. Bigg Boss Kannada season 8 Auditions and Registration start in the earlier month of 2020.

As per as Times of India Actor Sudeep Show BBK coming with new season soon. For registration, interested candidates can visit the official website of the Voot or can download the Voot app from the Google Play Store.

The link of the registration form of the Bigg Boss Kannada Season 8 will be available on the home page of the website.

You will need to fill personal and contact details of yours. Make sure you fill your accessible contact details so that the makers of the show can get in touch with you for further process.

After filling this information, You will need to upload the introduction video of yourself. If your application gets shortlisted by the official team of the Bigg Boss Kannada season 8 will call you for the ground edition.

So make sure you stay tuned here to get the latest updates from the upcoming season of the Bigg Boss Kannada.

Incredible Tips And Tricks on How To Take Wedding Pictures For Beginners.

How to train a cat